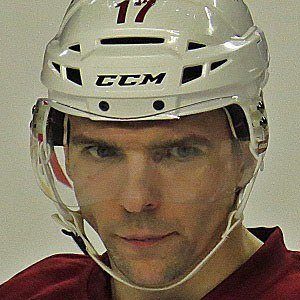 NHL winger who began his career with the Colorado Avalanche in 2001. He has also played for the Vancouver Canucks, Chicago Blackhawks, Carolina Hurricanes, Phoenix Coyotes and Tampa Bay Lightning.

He was playing for the Hull Olympiques of the QMJHL when he was selected 7th overall by the Avalanche in the 1999 NHL Draft.

He helped the Czech national team win gold at the 2005 World Championships in Vienna.

He was teammates with captain Shane Doan on the Coyotes from 2009 to 2014.

Radim Vrbata Is A Member Of