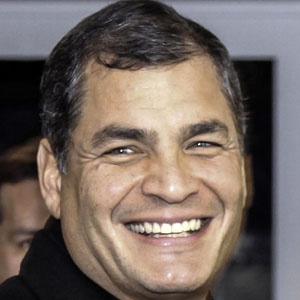 Politician who became President of the Republic of Ecuador in 2007 and led the country in economic and social reform. He has been accused of being an authoritarian leader but many have still credited him with reducing poverty and unemployment in his country.

He received a degree in economics from Belgium's Universite Catholique de Louvain and went on to earn a Ph.D. from the University of Illinois at Urbana-Champaign.

He served as both director of the Ecuadorian Ministry of Education and Culture and Minister of Finance before becoming President of the Republic of Ecuador and President pro tempore of the Union of South American Nations.

He married Anne Malherbe Gosselin in Belgium. Together, the couple had three children: Anne Doninique, Miguel, and Sofia.

He was a political ally of the late Venezuelan President, Hugo Chavez.

Rafael Correa Is A Member Of