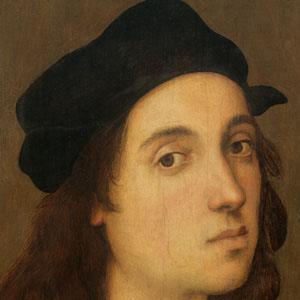 Remembered best for his famous fresco The School of Athens, this important Italian artist of the High Renaissance also created numerous portraits, religious paintings, drawings, and prints. Also an architect, he designed the Chigi Chapel and several other structures in Rome, Italy.

In his early years, he was an artistic assistant to the painter Pietro Perugino. His first known solo artworks include the Baronci Altarpiece and the Mond Crucifixion.

On the invitation of Pope Julius II, he abandoned his itinerant lifestyle in 1508 and settled in the city of Rome.

Born Raffaello Sanzio da Urbino, he was the son of a court artist named Giovanni Santi. Though Raphael never married, he was briefly engaged to a Maria Bibbiena, and he also had a long-lasting romantic relationship with a woman named Margherita Luti.

He, Michelangelo, and Leonardo da Vinci are considered the three most important artists of the High Renaissance.

Raphael Is A Member Of