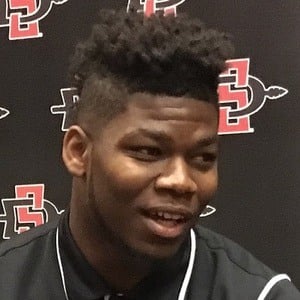 Stand-out running back at San Diego State drafted in the first round of the 2018 NFL draft by the Seattle Seahawks.

He finished fifth in Heisman Trophy voting in 2017 after leading the nation with with 2,248 rushing yards while scoring 23 touchdowns.

In his Heisman Trophy finalist season, he scored a 70-yard touchdown on one of his only two punt returns on the season.

He has brothers named Elijhaa and Elijaah.

He and Saquon Barkley were the only two running backs taken in the first round of the 2018 NFL draft.

Rashaad Penny Is A Member Of