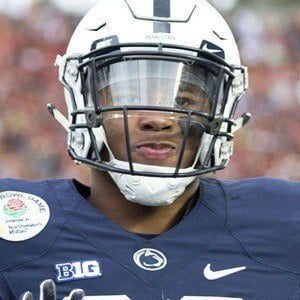 Running back who was selected 2nd overall in the 2018 NFL Draft by the New York Giants. He was named 2018 Rookie of the Year after compiling over 2,000 yards from scrimmage. During his college career at Penn State University, he was named the Big Ten Offensive Player of the Year in 2016 and 2017 and he was a Consensus All-American in 2017.

In his senior season at Whitehall High School, he rushed for an incredible 31 touchdowns. He initially committed to Rutgers before changing to Penn State.

He was named Mr. Pennsylvania Football in 2014. In 2017, he was named a semifinalist for the Walter Camp award.

He was born to parents Alibay Barkley and Tonya Johnson. He has siblings named Shaquona, Aliyah, Rashard and Ali. He welcomed a daughter named Jada Clare with his girlfriend Anna Congdon in April 2018.

He was coached by James Franklin at Penn State University.

Saquon Barkley Is A Member Of