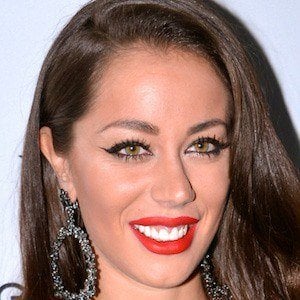 Swedish fashion designer and singer known for being a member of the group Sunblock in the mid-2000s. She's created fashion lines for Nelly.com and Solo and is commonly known by the name Rebecca Stella.

She joined Sunblock, a group made up primarily of glamour models, in 2005. They had two top ten hits in the UK in 2006.

She's worked on TV shows like Project Runway and Paradise Hotel and has more than 460,000 followers on Instagram.

She's of Syrian, Lebanese, and Greek descent and has a brother.

She appeared on Let's Dance 2015, which was ultimately won by Ingemar Stenmark.

Rebecca Simonsson Is A Member Of