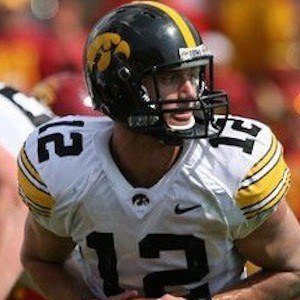 NFL quarterback who was selected in the 5th round of the 2011 NFL Draft by the Kansas City Chiefs.

He was a 5-star recruit while playing Lake Catholic High School in his hometown of Mentor, Ohio, and then play college football at Iowa.

At the end of the 2009 season he led Iowa to an Orange Bowl victory over Georgia Tech.

He married his High School girlfriend.

In his second NFL season, he battled with Brady Quinn for the role of Chiefs' backup quarterback.

Ricky Stanzi Is A Member Of