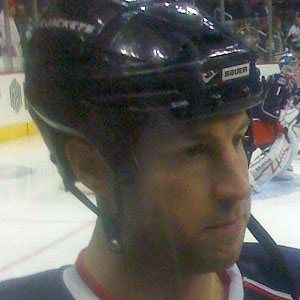 NHL left wing and center who debuted with the Philadelphia Flyers in 2005, then joined the Columbus Blue Jackets in 2008 and quickly became one of the team's offensive leaders. He tallied 20+ goals four straight seasons from 2008-09 to 2011-12. In 2015, he was traded back to the Flyers.

He played college hockey with the Ohio State Buckeyes from 2000 to 2003. During his time there, he was selected 16th overall in the 2001 NHL Draft by the Vancouver Canucks, then traded to the New York Rangers and then to the Flyers without playing a single game with either Vancouver or New York.

On April 16, 2009, he scored the first playoff goal in Columbus Blue Jackets history against the Detroit Red Wings. The Wings would sweep the Blue Jackets but Umberger totaled an impressive three goals in the four-game series.

He re-joined the Flyers in 2015 after a trade that sent Scott Hartnell to the Blue Jackets.

RJ Umberger Is A Member Of