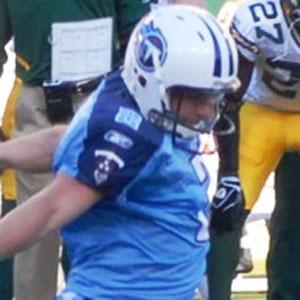 Longtime NFL kicker had consecutive All-Pro seasons as a Tennessee Titan in 2007 and 2008. He also tied the record for most game-winning fields goals in a season 2005.

He played college football for Auburn and Georgia Southern before a two-year stint in the Arena Football League from 2003-2005.

He broke the NFL record for most consecutive games with a 40+ yard field goal by accomplishing the feat 10 times in a row.

He was briefly married to Rachel Bradshaw in 2014. He has a son named London Tyler. His father's name is Larry and his mother's name is Anne.

He was married to Terry Bradshaw's daughter.

Rob Bironas Is A Member Of