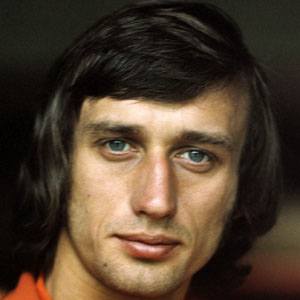 Dutch left winger who was instrumental to his national team's appearances in two World Cup finals, in 1974 and 1978.

He started his career with DWS, an amateur club in his hometown, before going on to Anderlech, where he spent the best years of his career.

He was a talented dribbler and kicker and used to taunt goalkeepers on penalty shots by telling them where he would kick the ball and get it past them anyway.

He grew up in Amsterdam, Netherlands.

He and Dennis Bergkamp both represented the Netherlands in World Cup play.

Rob Rensenbrink Is A Member Of