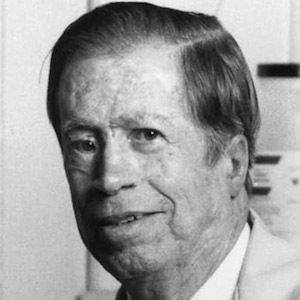 An American biochemist who won the Nobel Prize in Chemistry in 1984 for his invention of solid phase peptide synthesis. He was also awarded the Association of Biomolecular Resource Facilities Award in 1998 for his contributions to Biomolecular Technologies.

He graduated from UCLA with a degree in chemistry.

In 1993, he published his autobiography, Life During a Golden Age of Peptide Chemistry.

He had six children with his wife Elizabeth Furlong after the couple married in 1949.

He won the Nobel Prize in Chemistry three years after Roald Hoffmann did.

Robert Bruce Merrifield Is A Member Of