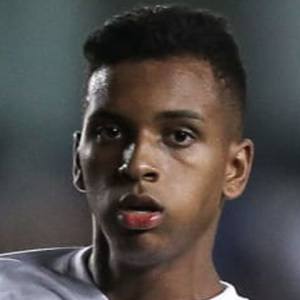 Brazilian professional football player who is known for his work as a forward for the Real Madrid club. He is also known for having played on several of Brazil's youth national teams.

He first started his youth career playing for the Santos club in 2011. He went on to make his senior debut with them in 2017. That same year he also made his debut with the Brazil under 17 national team.

He is known for having won the Best Newcomer award in 2018 for his work with the Campeonato Paulista club.

His father Eric is also a former professional football player.

He is known for having assisted Gabriel Barbosa's last goal in a 2018 match against Vitoria.

Rodrygo Is A Member Of