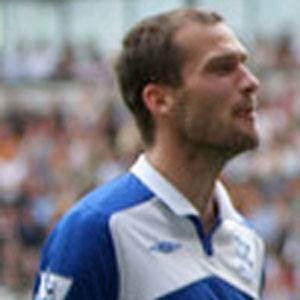 English defender who was traded to the Wolverhampton Wanderers in 2011 after spending two years with Birmingham City and three years with Cardiff City.

He began his youth career at age 15 with the Wycombe Wanderers and debuted with the club's senior team in 2000.

He helped Birmingham City win the League Cup in 2011.

He married his college sweetheart, Melissa; the couple had a daughter named Brooke together.

He played alongside Jordon Mutch on Birmingham City.

Roger Johnson Is A Member Of