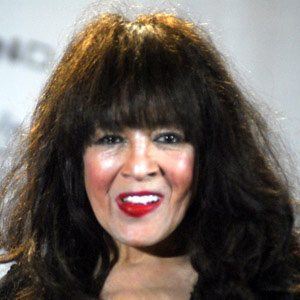 Rock 'n' roll pioneer who fronted The Ronettes, the group that sang "Be My Baby." She has collaborated with artists like the Raveonettes.

She released her first album as a member of The Ronettes in 1961.

She was inducted into the Rock and Roll Hall of Fame in 2007.

Her six-year marriage to ended in 1974; the couple had adopted three children: Donte, Louis, and Gary.

She was featured on Eddie Money's 1986 single "Take Me Home Tonight."

Ronnie Spector Is A Member Of