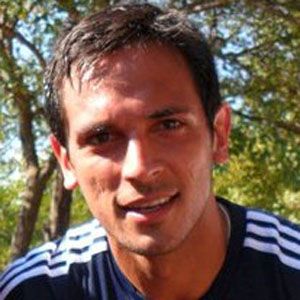 Paraguayan striker who played in the English and German leagues and in the 2006 World Cup.

He started his career in the youth system of the Olimpia football club and made his first team debut at age 16.

He played a stint with Blackburn in the Premier League, but he was then bought by Manchester City; his time with Manchester was unsuccessful and he was loaned out until the end of his contract.

He grew up in Asuncion, Paraguay. He married Giselle Tavarelli and he has three children: Tobias, Fiorella and Benjamin.

He was teammates with Mario Balotelli for a few seasons on Manchester City.

Roque Santa Cruz Is A Member Of