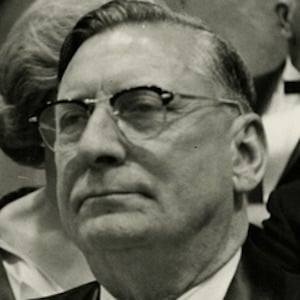 Politician and Democrat who was the Governor of Mississippi from 1960 to 1964. During the 1960s, was a staunch supporter of segregation, and was a major catalyst for the Ole Miss riot of 1962.

He was one of the top lawyers in Mississippi, earning more than 100,000 a year in conduction damage lawsuits, which financed his political campaign for governor.

In 1962 he refused to enroll a black student, James Meredith, into the University of Mississippi, defying a direct Federal court order; the subsequent clashes near the campus killed several people.

He was born in Standing Pine, in Leake County, Mississippi, the youngest of ten children of a Confederate veteran.

James H. Meredith was black student who challenged the state's segregation policy with his attempted enrollment into Ole Miss.

Ross Barnett Is A Member Of