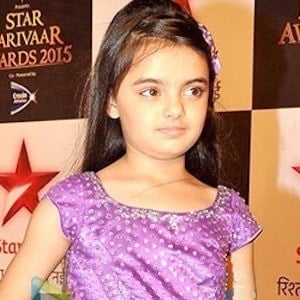 Indian TV actress who is best known for her portrayal of Ruhi in the Star Plus children's series Ye Hai Mohabbatein. In recognition of her performance, she won the Indian Telly Award for Most Popular Child Actress.

At the age of 5, she appeared as Aashi on the Zee TV soap opera Mrs. Kaushik Ki Paanch Bahuein. She has completed her schooling at the IGSC school in Mumbai, India.

In 2014, she appeared in the Bollywood action film Jai Ho. That same year, she appeared as herself on the TV show Comedy Nights with Kapil.

She was born in Delhi, India, and later raised in Mumbai.

In 2015, she was cast to appear in the 2016 Indian action film Ghayal Once Again alongside Sunny Deol.

Ruhanika Dhawan Is A Member Of