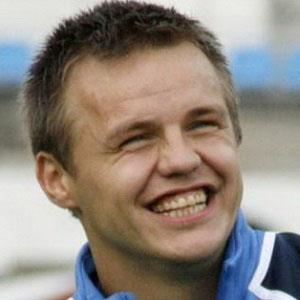 Russian winger and striker best known for his years with Lokomotiv Moscow, with whom he won Russian Premier League, Russian Cup and Russian Super Cup titles. He represented Russia at tournaments like the 2002 FIFA World Cup. He was released from his contract in 2009.

He was born in Moscow and came up through the youth system of Torpedo Moscow before making his senior debut with the club in 1998.

His daughter Kristina Pimenova is one of the world's top child models, with more than 700,000 followers on Instagram.

He married Russian model Glikeriya Shirokova. In addition to Kristina, he has a daughter named Natalia.

He was teammates with Aleksandr Kerzhakov on the Russian squad at the 2002 FIFA World Cup.

Ruslan Pimenov Is A Member Of