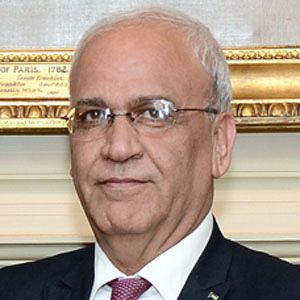 Palestinian Parliament member and politician best known as the former Chief of the PLO Steering and Monitoring Committee. He notably helped negotiate the 1993 Oslo Accords with Israel.

He traveled to the United States to earn an MA in Political Science at San Francisco State University.

He has been criticized for exaggerating Palestinian death tolls at the hands of the Israeli Government in order to drum up support for his cause.

He is one of seven children.

He is heavily involved in Palestinian politics like Yasser Arafat was.

Saeb Erekat Is A Member Of