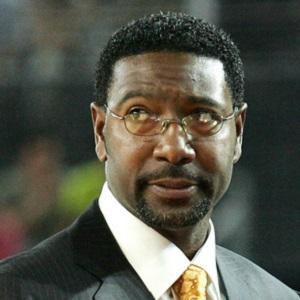 Forward for the Minnesota Timberwolves and Indiana Pacers from 1989 to 2002. He served as head coach of the Toronto Raptors from 2004 to 2008, then began working as an NBA Analyst.

He was a standout player at Mercer University, setting the school record for points scored and leading the university to consecutive NCAA tournament appearances.

He was named NBA Coach of the Year in 2007 after leading the Raptors to a 47-35 record and the third seed in the Eastern Conference.

He had four daughters with his wife; the two settled in Atlanta.

He overtook Lenny Wilkens for the most wins in the Raptors' history in 2007.

Sam Mitchell Is A Member Of