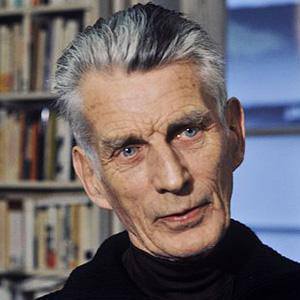 Irish postmodernist writer who is most famous for his absurdist plays, Waiting for Godot and Endgame, and for novels such as Molloy, Malone Dies, and The Unnamable. He received the Nobel Prize in Literature in 1969.

As a boy, he was a skilled athlete, and he went on to play cricket for Trinity College, Dublin. He began his writing career by publishing critical studies of the works of James Joyce and Marcel Proust.

He received the Croix de Guerre in 1945 for his efforts on behalf of the World War II-era French Resistance.

He was born in Dublin, Ireland to William Frank Beckett and Maria Jones Roe. In 1961, he married a French woman named Suzanne Dechevaux-Dumesnil, and he also had a long-lasting affair with BBC editor Barbara Bray.

He was an admirer of Buster Keaton, and he went on to cast Keaton in a silent film he wrote that was simply titled "Film."

Samuel Beckett Is A Member Of