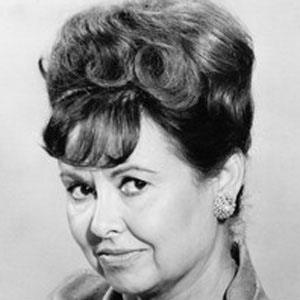 Actress who began playing Gladys Kravitz on the third season of the classic show Bewitched.

She began her acting career in 1947, and got her big break as Miss Duffy in Duffy's Tavern, appearing in that role for four years.

She was the third Gladys on Bewitched. The first, Alice Pierce, had to leave the show due to her cancer, and was replaced on a temporary basis by Mary Grace Canfield.

In 1963, she released a comedy single "Hello Melvin" as a response to Allan Sherman's previous hit "Hello Muddah, Hello Fadduh."

Sandra Gould Is A Member Of