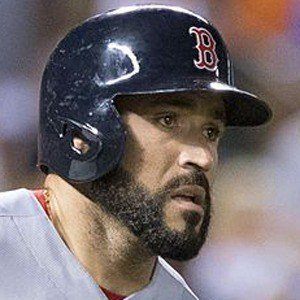 MLB catcher who was traded from the Washington Nationals to the Boston Red Sox in 2015. He won the 2018 World Series with the Red Sox.

He originally signed with the Nationals in 2007, and would make his professional debut with the Gulf Coast Nationals later in the year.

He was called up to The Show for the first time in May of 2012, and would seriously sprain his right ankle at a home plate collision in his debut.

He got a tattoo of the date he was married on his back.

He was hurt in his MLB debut after a collision with Chase Headley at home plate.

Sandy León Is A Member Of