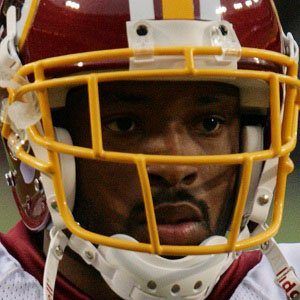 Speedy wide receiver who made his NFL debut in 2001 for the New York Jets. He spent the bulk of his career with the Washington Redskins from 2005-2014;  he made the Pro Bowl and All-Pro teams in 2005.

As a walk-on at the University of Miami, he became an All-American in 2000. He was selected 16th overall in the 2001 NFL draft by the Jets.

On Monday Night Football in week 2 of the 2005 season, he caught two touchdowns in the final minutes of a 14-13 Washington victory over Dallas.

He married LaTosha Allen-Moss, his high school girlfriend, with whom he has three children.

While at the University of Miami, he became the school's all-time leader in receiving yards, surpassing legend Michael Irvin.

Santana Moss Is A Member Of