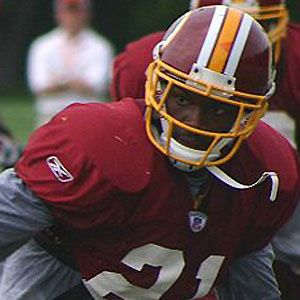 Former NFL safety who was selected to two Pro Bowls with the Washington Redskins from 2004 to 2007. He was tragically shot to death in his home in 2007.

He played defensive back, running back, and linebacker during his time at Gulliver Preparatory School. He won the 2001 BCS National Championship while playing at the University of Miami.

He was named the hardest-hitting player in the NFL by Sports Illustrated prior to the 2007 season.

He was survived by his daughter, Jackie.

His memory was honored by Redskins coach Joe Gibbs, who sent just 10 players on the field for the first play of the team's first game following Taylor's death.

Sean Taylor Is A Member Of