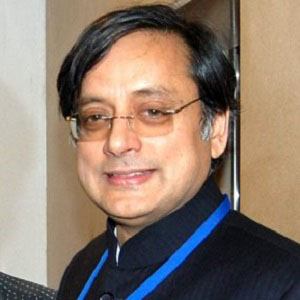 Notable as both a politician and a writer, Tharoor served in the Indian Lok Sabha (lower parliamentary house); was appointed Minister of State for both External Affairs and Human Resource Development; and published numerous novels and non-fiction works, including The Great Indian Novel (which received the 1991 Commonwealth Writers' Prize).

After completing his bachelor's degree at St. Stephen's College, Delhi, he earned his doctorate from Tufts University's Fletcher School of Law and Diplomacy.

A journalist as well as a novelist and politician, he penned articles for The Times of India, The Washington Post, The New York Times, and Newsweek International, among other prominent publications.

One of three children born to Chandran and Lily Tharoor, he spent his childhood in both England and India. His first marriage -- to Tilottama Mukherji -- produced sons named Kanishk and Ishaan before ending in divorce; he later married Christa Giles, followed by businesswoman Sunanda Pushkar.

In the late 1990s, he served as Executive Assistant to then-United Nations Secretary General Kofi Annan.

Shashi Tharoor Is A Member Of