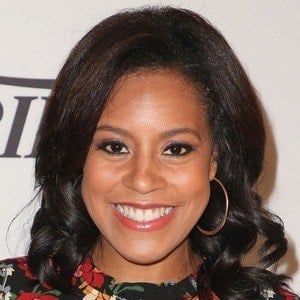 News anchor most famous for her work with Weekend Today, MSNBC Live and NBC News. She has interviewed major political figures and entertainers like Barack Obama, Kevin Hart and Halle Berry during her career.

She graduated from Wichita Heights High School in Wichita, Kansas and, later, Northwestern University. Her first broadcasting job was for WICS-TV in Springfield, Illinois.

She has received awards from the National Association of Black Journalists and the Oklahoma Chapter of the Society of Professional Journalists.

She married Uche Ojeh, with whom she has children named Clara, Uche and Kayin. She is the daughter of U.S. District Court Judge C. Darnell Jones II.

She has co-presented MSNBC Live along with Brian Williams.

Sheinelle Jones Is A Member Of