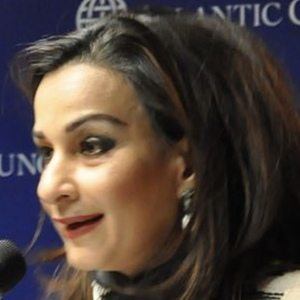 Pakistani politician who was appointed as Pakistan's Ambassador to the United States in 2011.

She worked as a professional journalist for twenty years and was editor-in-chief of Pakistan's leading news magazine, The Herald,

She served as an Member of the National Assembly from 2002 to 2007 and acted as Central Information Secretary.

She was previously married to Bari Mian, grandson of Abdul Bari Firangi Mahali.

In 2008, she was sworn in as the Minister for Information and Broadcasting by President Pervez Musharraf.

Sherry Rehman Is A Member Of