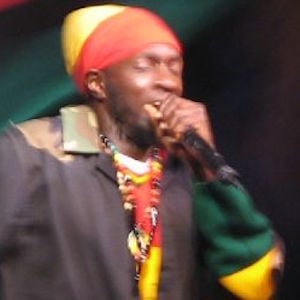 Reggae musician who is known for being one of the most commercially and critically successful artists of the genre. He released his debut album, Burning Up, in 1995 and has gone on to release over 50 more.

He studied mechanical engineering at Dunoon High School in Kingston, Jamaica. He gained his appreciation for reggae by frequenting dance halls during his teenage years.

In February 2010, he sang at Zimbabwean President Robert Mugabe's 86th birthday celebration. In 2014, he was nominated for the Best Reggae Album Grammy Award for his 2013 album, The Messiah.

He was born and raised in Kingston, Jamaica by strict Rastafarian parents. His son, Melek, has also stated his interest in pursuing a music career.

In 2014, he collaborated with fellow Reggae singer Stephen Marley on the song "Rock Stone."

Sizzla Is A Member Of