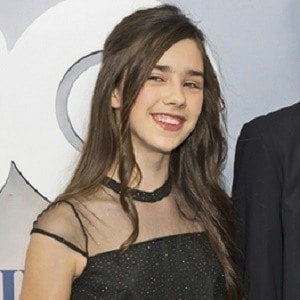 American actress well-known for her roles in blockbuster films World War Z and The Conjuring. In 2016, she began appearing on the HBO comedy series Divorce as Lila DuFresne.

She first appeared onscreen at age seven in a 2011 episode of Royal Pains.

She played Judy Warren, daughter of famous ghost hunters Elizabeth and Ed Warren, in the 2013 film The Conjuring and its 2016 sequel.

She was born to actress Alana Jerins and artist Edgar Jerins. Her sister, Ruby Jerins, became known for her roles in the television series Nurse Jackie and in the film Remember Me.

She played the daughter of Brad Pitt's character in the 2013 zombie film World War Z.