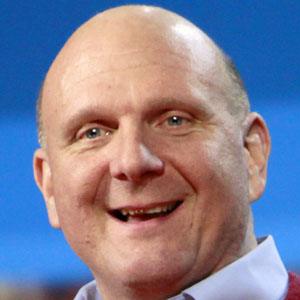 Known best for serving from 2000 until 2014 as Chief Executive Officer of the Microsoft Corporation, this multi-billionaire purchased the Los Angeles Clippers National Basketball Association team in late 2014.

After graduating from Harvard with a bachelor's degree in economics and applied mathematics, he briefly attended Stanford University's graduate business school before ending his studies to work for Microsoft.

In a 1999 program titled Pirates of Silicon Valley, Ballmer, portrayed by actor John DiMaggio, appears as a principal character.

He grew up in Michigan as the son of a Swiss automotive manager father and a Jewish mother of Belarusian heritage. Following their 1990 wedding, he and his wife Connie Snyder raised three boys.

He and Microsoft founder Bill Gates were classmates at Harvard. During their college years, both young men competed in the William Lowell Putnam Mathematical Competition; Ballmer actually placed higher than Gates in the contest.

Steve Ballmer Is A Member Of