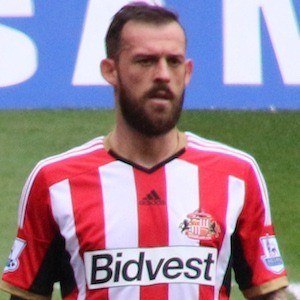 Striker who has appeared in international competition for Scotland. He joined Sunderland in 2012 and previously played for Hibernian, Burnley and Wolverhampton Wanderers in his senior career.

He was brought up through the Hiberian youth system from 2000 to 2004.

He was named Premier League Player of the Month in September of 2012.

Born in Shrewsbury, Shropshire, England, he spent several early years living on British Army bases in England and Germany as his father Kenny Fletcher served in the military. He lost his father to cancer when he was 10 and his father was 37. His mother Mary relocated him and his sister Bree to Hamilton, South Lanarkshire.

He played for the Scottish international team that was captained by Scott Brown.

Steven Fletcher Is A Member Of