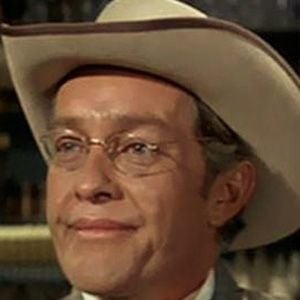 Character actor known for villainous roles in iconic westerns, such as the coldhearted prison captain in the 1967 classic, Cool Hand Luke. He read the iconic line, "What we've got here is failure to communicate."

He excelled at swimming and diving as a youth, and won the National Junior Springboard Diving Championship when he was 17 years old.

He received acclaim for his performance as the gleefully sadistic henchman in The Man Who Shot Liberty Valance.

He appeared in several films with John Wayne, including McClintock, The Horse Soldiers, and The Man Who Shot Liberty Valance.

Strother Martin Is A Member Of