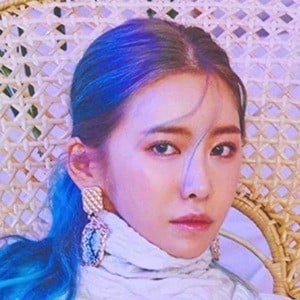 Korean pop singer who became known as one half of the K pop duo LODIA, which released the single "I Got A Feeling." She went on to become a solo artist with hits such as "I Feel" and "Calling In Love" featuring rapper Beenzino.

She was a computer science major in college and didn't start singing until her early 20s.

She competed on MBC's King of Mask Singer in 2017 and was known as "Skip to the End, Hello."

She was born Shin Suran but is also known as Elena.

She has cited artists Amy Winehouse and Kimbra as some of her biggest inspirations.

Suran Is A Member Of