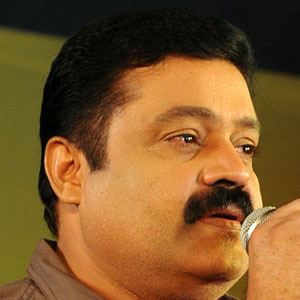 With over two hundred Indian Malayalam film credits to his name, this popular actor received a National Film Award for his portrayal of Kannan Perumalayan in the 1997 movie Kaliyattam (a retelling of Shakespeare's Othello). His other well-known roles include Warrier in Makalkku and Captain Vikas Roy in Melvilasom.

As a child, he co-starred with Prem Nazir in the 1965 film Odeyil Ninnu.

His roles in four early 1990s films -- Thalastaanam, Mafia, Commissioner, and Ekalavyan -- launched him to stardom.

He and his wife Radhika became parents to five children: Gokul, Bhavna, Bhagya, Madhav, and Lekshmi.

He shared the screen with Sarath Kumar and Dileep in the 2010 movie Christian Brothers.1

Suresh Gopi Is A Member Of