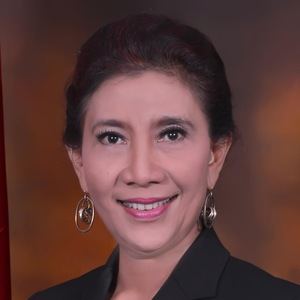 Indonesian entrepreneur who is best recognized for being Indonesia's Minister of Maritime Affairs and Fisheries. She is also known for being the owner of PT ASI Pudjiastuti Marine Products which exports seafood to a variety of International suppliers through Susi Air.

She was expelled from school for her political activism in the Golput movement. In 1983, she became an entrepreneur, starting a seafood distribution company in Pangandaran. In October of 2014, she was appointed to Minister of Marine Affairs and Fisheries, becoming the first Indonesian minister to have never completed a high school education.

She has won several awards for her political activism including the Tourism Pioneer Award by the West Java Department of Culture and Tourism in 2004 and the Leaders for Living Planet Award by the WWF in 2016.

She was born and raised in Pangandaran, West Java, Indonesia. She has three children, Panji, Nadine, and Alvy.

She was appointed for her first Minister position by President Joko Widodo.

Susi Pudjiastuti Is A Member Of