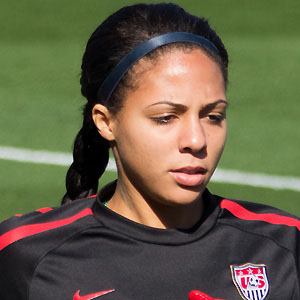 Striker who began her professional career with the Vancouver Whitecaps in 2005. She joined the U.S. women's soccer team in 2011 and was a member of the 2015 World Cup Championship team.

She played little league baseball from 1994 to 2004, but always kept her dream of playing soccer for the U.S.

She became the all-time leading scorer on the U.S. U-20 team, with 24 goals in 39 appearances.

Her father Ray Chadwick briefly pitched for the California Angels in the MLB. She married English soccer player Dom Dwyer in January 2015. She has a son named Cassius and a daughter named Roux.

She joined Abby Wambach on the U.S. women's soccer team in 2011.

Sydney Leroux Is A Member Of