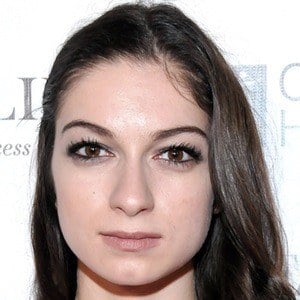 Canadian actress who is best recognized for her recurring role as Ava O'Malley on the 2019 series V-Wars. She is also known for having appeared on the series' Departure, Shadowhunters, and Grand Army as well.

She made her television debut in 2013 when she appeared as the character Paula in an episode of Degrassi: The Next Generation. She gained further attention after landing the role of Grace in the feature film Level 16.

She attended a Javier Munoz show and shared a photo from the experience through her Instagram in October of 2019.

She shared a photo of her father through Instagram in May of 2014. In 2020, she became engaged to Alex Ozerov.

She shared a photo with fellow actor Isaiah Mustafa through her Instagram in February of 2019.

Sydney Meyer Is A Member Of