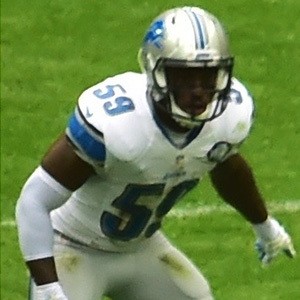 Outside linebacker who played for the Detroit Lions from 2012 to 2017 before signing with the Oakland Raiders in 2018. He was drafted in the fifth round out of Temple University in 2012.

He won the state championship with West Side High School in Newark, New Jersey in 2007.

He was a Second Team All-MAC selection in his senior year at Temple.

He married a woman named Shannon, with whom he has children. He is the nephew of former NFL defensive end Willie Whitehead.

He was coached by Jim Caldwell as a member of the Lions.

Tahir Whitehead Is A Member Of