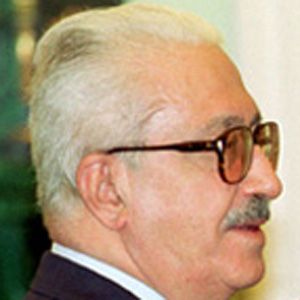 Minister in many departments in the Iraqi government who was also a close advisor to Saddam Hussein. He was put in prison in 2003 following the American invasion of Iraq and in 2010 he was sentenced to death by the Iraqi High Tribunal.

He attended Baghdad University and worked as a journalist before becoming involved in politics.

He was the international spokesman for Iraq when the country invaded Kuwait.

He raised one son with his wife.

He was the individual former president George W. Bush felt was responsible for the supposed presence of weapons of mass destruction.

Tariq Aziz Is A Member Of