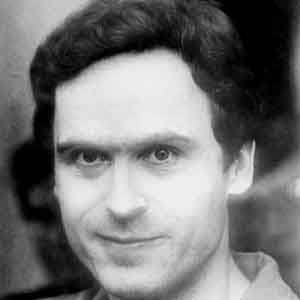 Infamous serial killer and necrophile who was discovered to have as many as thirty-six victims between 1973 and 1978. In 2019, Netflix released a movie based on his life called Extremely Wicked, Shockingly Evil, and Vile.

He was raised by his grandparents, although he was told they were his parents. He was jailed for the first time in 1975 after allegedly kidnapping and assaulting a victim in Utah.

He briefly escaped from prison in 1975 by starving himself enough to be able to sneak through the airducts, but was quickly recaptured.

He was the son of Louise Cowell; he had four step-siblings. In 1979, he asked DES coworker Carole Ann Boone to marry him while she was testifying on his behalf in court. They had a daughter named Rose together in 1981. He would be put to death in January of 1989 by the electric chair.

He was portrayed by Zac Efron in the film Extremely Wicked, Shockingly Evil, and Vile.

Ted Bundy Is A Member Of