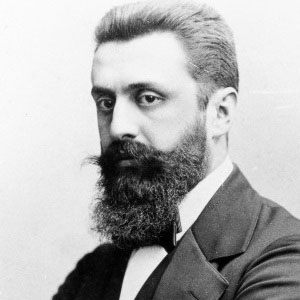 Hungarian Jewish author and journalist credited with founding the Zionist movement. His publications include Der Judenstaat (The Jews' State) and numerous plays.

Before becoming a journalist, he studied law at the University of Vienna.

He published his final literary work, a Zionist-themed novel entitled Altneuland, in 1902.

His unhappy marriage to Julie Naschauer produced three children, one of whom died of a drug overdose at the age of forty.

He and fellow journalist Berl Katznelson were both key figures in Zionism.

Theodor Herzl Is A Member Of