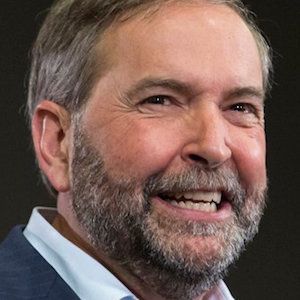 Lawyer by profession who was elected as the leader of of the New Democratic Party of Canada in 2012. He previously held positions as a Member of the National Assembly of Quebec for Chomedey, Quebec Minister of the Environment, Member of the Canadian Parliament for Outremont and Opposition House Leader.

He started law school at the age of 18 after graduating in Social Sciences from CEGEP Vanier College. he would attend McGill University where he obtained degrees in common law and civil law. There he was elected president of the McGill Law Students Association.

He became the Director of Legal Affairs at Alliance Quebec in 1983. He would start his own private law practice in 1985.

His mother Jeanne was a school teacher while his father Harry worked in insurance. He has nine brothers and sisters and is the second oldest of them. He married Catherine Pinhas, a psychologist, in 1976, and together they had children named Matt and Greg.

He served as Leader of the Opposition while Stephen Harper served as the Prime Minister of Canada.

Thomas Mulcair Is A Member Of