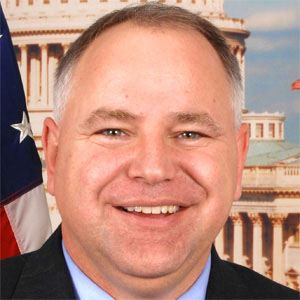 A Democratic-Farmer-Labor Party member, he entered the United States Congress in 2007 as a representative of Minnesota's southern first district constituency. He served on the House Agriculture, Transportation, and Veterans' Affairs Committees. In 2019, he became governor of Minnesota.

After graduating from Chadron State College in Nebraska, he taught in China and at a South Dakota Native American Reservation.

He had a more than two-decade-long career with the United States Army National Guard.

A native of West Point, Nebraska, he later settled in Mankato, Minnesota. His marriage to Gwen Whipple resulted in two children.

He and fellow Minnesota politician and U.S. Representative Keith Ellison both became members of the Democratic-Farmer-Labor Party.

Tim Walz Is A Member Of