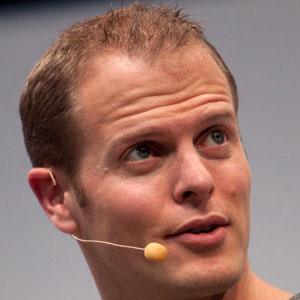 Although he also founded a web-based company called BrainQUICKEN and subsequently became an angel investor for other start-up businesses, this entrepreneur is most famous for writing a number of bestselling motivational books.

In 2000, he graduated from Princeton University with a degree in East Asian Studies.

His best known works include The 4-Hour Chef, The 4-Hour Body, and The 4-Hour Workweek: Escape 9-5, Live Anywhere, and Join the New Rich. He created an influential blog that launched the careers of many other self-help authors.

He was born and raised in East Hampton, New York, and he later settled in San Francisco, California.

After breaking the Guinness World Record for the greatest number of dance spins, he appeared with his tango partner, Alicia Monti, on Regis Philbin's and Kelly Ripa's popular talk show, Live with Regis and Kelly.

Tim Ferriss Is A Member Of