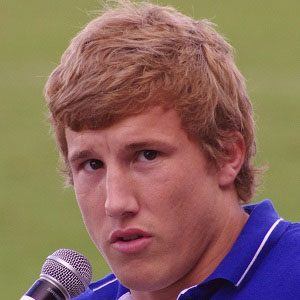 Rugby league halfback who joined the Canterbury Bulldogs in 2011 and made the National Rugby League Grand Final with the team in 2014. He has played representative rugby with NSW City and New South Wales.

He was born in Sydney, New South Wales and played junior rugby with the the Cabramatta Two Blues. He made his first grade debut for the Manly-Warringah Sea Eagles in 2010.

While playing with the Sunshine Coast Sea Eagles, the feeder team of Manly-Warringah, he was named the club's Player of the Year in 2009.

He married Chantelle Traficante in 2014.

He was named co-captain of the Bulldogs for the 2014 NRL Grand Final following an injury to Michael Ennis.

Trent Hodkinson Is A Member Of