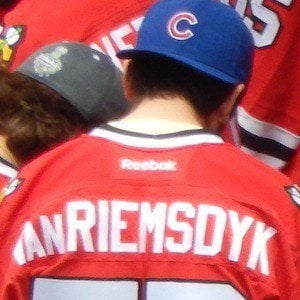 American hockey defender who made his NHL debut with the Chicago Blackhawks in 2014. He signed with the team after going undrafted out of the University of New Hampshire. In 2015, he helped the Blackhawks win a Stanley Cup Championship.

His brother was drafted second overall by the Philadelphia Flyers in 2007.

He became teammates with Conn Smythe Trophy winner Patrick Kane in Chicago in 2014.

Trevor van Riemsdyk Is A Member Of