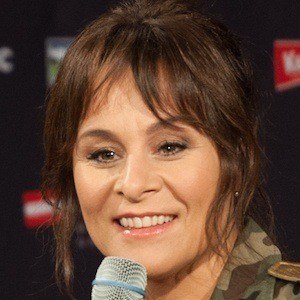 Dutch pop and jazz singer known for her time as part of the band Total Touch from 1990 to 2001. She then embarked on a solo career that culminated in representing her country at the 2015 Eurovision Song Contest.

She and her brother grew up playing in bars around Amsterdam and eventually formed the band Total Touch. Her success led her to go on a two-year tour with Candy Dulfer.

She's received the Edison and Golden Harp awards. Both her collaborative and solo careers have resulted in platinum, chart-topping albums.

She was married to Sander van den Eeden from 2002 to 2006 and has three children. Her brother's name is Tjeerd and her real name is Judith Katrijntje Oosterhuis.

She's performed and collaborated with many famous artists over the course of her career, including Burt Bacharach.

Trijntje Oosterhuis Is A Member Of