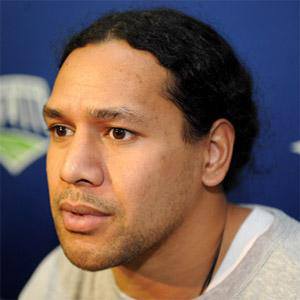 College All-American at USC who was named the NFL's Defensive Player of the Year in 2010 with the Pittsburgh Steelers. He helped lead the Steelers to victory in Super Bowls XL and XLIII.

He earned all-state and all-league honors in basketball, baseball, and football while attending Douglas High School in Winston, Oregon.

Lloyd's of London insured his trademark wavy hair for a million dollars in August, 2010.

He married Theodora Holmes in January, 2005 and had two sons with her named Paisios and Ephraim.

He and Larry Fitzgerald shared the cover of the Madden NFL 2010 video game.

Troy Polamalu Is A Member Of