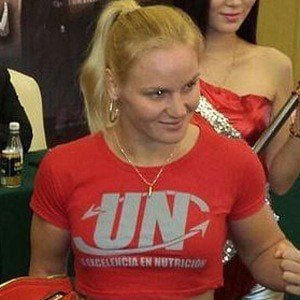 Muay Thai fighter and mixed martial artist who joined the UFC's women's bantamweight division in 2015. She has won more than half a dozen I.F.M.A. Royal World Cup Tournament Championships in her career.

She began learning taekwondo at the age of five and would later branch into kickboxing at the age of twelve. She would begin competing in MMA fighting in 2003.

She was expected fight Amanda Nunes for the UFC Bantamweight title at UFC 213, but Nunes pulled out on account of illness on the day of the bout.

She was born in Frunze, Kirghizia, USSR to a Russian family. Her mother and older sister, Antonina, both practiced taekwondo.

In January 2017, she beat fellow MMA fighter Julianna Pena on UFC on Fox.

Valentina Shevchenko Is A Member Of